The right to protest peacefully (freedom of speech and expression) is a fundamental right afforded to every citizen by the US Constitution. It’s right up there with freedoms of equality and religion. But in my lifetime, I have never seen anyone protest peacefully and have that right respected. Tolerated occasionally, but never respected.

When I was born in 1961, people were being jailed in South Carolina and Mississippi for the act of sitting at a lunch counter. In fact, charges against the Friendship 9 weren’t dropped until 55 years later, in 2016. 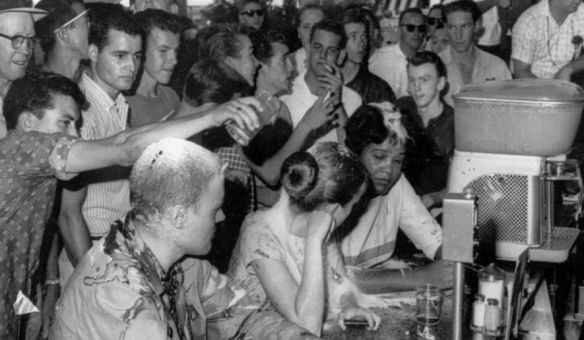 The reality is that not only do we Americans despise and disrespect our own right to protest, we don’t really have rights of equality or religion. Because if we deny those rights to anyone, we don’t have them either. But my question today is this:

If it’s not OK to protest by simply sitting quietly, declining to participate, can anyone tell me what form of protest is alright? If a citizen has a complaint about society, how can he or she express it without pissing off a mob of idiots?

If you are white and think you have equality, you don’t; you have supremacy.

If you are Christian and think you have equality, you don’t; ask a Muslim.

If you’re a veteran and think you fought to give Americans their rights, you’re wrong. Our rights – if we really had them – come from the Constitution, not from the military. And by the way, the National Anthem is a custom, not a legal requirement. It’s not mentioned in the Constitution. Demanding someone stand for a song is like insisting they eat turkey on Thanksgiving. Or watch football.

The service of our military and our veterans isn’t dishonored by citizens exercising their rights. It is dishonored when people deny the rights to others which are guaranteed to all.

So if you think you can stand up and speak out without being told to sit down and shut up, try standing up and speaking out. Considering all the stupid that’s floating in the atmosphere these days, I wish you luck.

If you think you can sit down and shut up, try sitting down and shutting up. See if it works better for you than it has for Colin Kaepernick. But don’t feel sorry for him when he’s cut from the 49ers. That was a foregone conclusion before he tried to protest. Everybody knew it; he’s been injured too long to play. But he’ll make $12,000,000 this year anyway.

That’s why Kaepernick protested during the preseason, when fewer people are watching, instead of waiting until the final roster is done. He knows he won’t be playing the season, no matter what he says or does.

Unlike the rights the Constitution only guarantees if we’re willing to defend them for everyone equally, Kaepernick’s money is guaranteed. And unlike all the millions of us who don’t have the rights we think we have, because we don’t want men like Kaepernick to have right either, that dude’s got nothing to lose.

2 thoughts on “A Lesson in Fundamentals”