SEATAC, Washington (AP) — All nine Christmas trees have been removed from the Seattle-Tacoma International Airport instead of adding a giant Jewish menorah to the holiday display as a rabbi had requested.

Maintenance workers boxed up the trees during the graveyard shift early Saturday, when airport bosses believed few people would notice.

“We decided to take the trees down because we didn’t want to be exclusive,” said airport spokeswoman Terri-Ann Betancourt. “We’re trying to be thoughtful and respectful, and will review policies after the first of the year.”

Rabbi Elazar Bogomilsky, who made his request weeks ago, said he was appalled by the decision. He had hired a lawyer and threatened to sue if the Port of Seattle didn’t add the menorah next to the trees, which had been festooned with red ribbons and bows. [Link]

Christmas is the popular word used for a Christian religious holiday, The Nativity of Our Lord Jesus Christ. The word Christmas itself is not an official Church sacramental term, but mostly we know what it means. In this part of the world, Christianity is the most prevalent religion, and the secular society has decided it’s fun to play along with the Christians, adding Santa Claus, reindeer, snowmen, etc. It’s pretty inoffensive. The Christmas tree is not a religious symbol, it’s a pagan and popular one, with only a vague cross-like symbolism. I mean, it’s vertical; it portends to rise from the corporeal to the divine. But it’s a dead tree, or plastic. It’s not a cross. Propping one up in a public place is not a de facto endorsement of Christianity. It’s an endorsement of evergreens at solstice, hohoho, mistletoe, chestnuts, egg nog, sleigh bells, santa and rudolph, “you’ll shoot you eye out, kid,” etc.

You do not have to be Christian to put up a tree, or lights, or exchange gifts, and doing so does not imply that you believe in Jesus Christ. That shibboleth is a bit more difficult to pronounce.

I’m all for Jewish folks and their Menorahs. God bless. A beautiful way to recall and celebrate a miracle. But tree is not to Christianity as Menorah or Star of David are to Judaism. Sure, I have a tree in my condo, with little ornaments, and my folks have a beautiful one with many lights and family heirlooms. I love Christmas trees, but we don’t pray around them. There’s no ritual. You put it up, decorate it, it’s fun. It’s not sacred. Our symbol is the Cross. If someone puts up a Cross in an airport, that’s when you get to demand equal protection.

If you went to Mecca or Tehran or elsewhere in the Muslim world, and demanded to nail up a cross during Ramadan or some other Muslim holy time, what do you think would be the reaction? Right, not well received. But we Christians are expected to donate our religious times to everybody else. We’ve already been overrun by commercialism. So if the good Rabbi wants to enlighten the bleak Solstice, maybe he should string some twinkly lights. Any color will do. And plain old UL-listed indoor-outdoor; no blessed oil required. Indeed, I can’t believe a Rabbi would want or permit a Menorah to be set up in an airport. I would be offended by a cross there. Doesn’t it mean something important, something that transcends picking up your luggage and trying to find the Hertz counter?

The lights on my balcony do not form a cross, because it’s a debasement of something Sacred to parade it around in public. That would be like me using Holy Water to clean my kitchen. Too bad the good Teacher in Seattle couldn’t just smile at the trees, and hope the kids were enjoying them, that the pretty robbons and bows lifted people’s spirits, brought some consolation to a embittered world in a dark time. 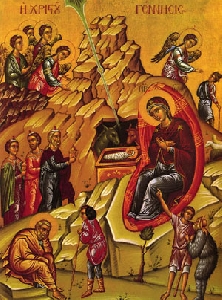