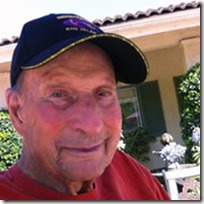 I was very sorry to learn of the passing of writer Bill Richardson of Santa Barbara.  I met Bill several years ago in a Montecito coffeehouse and had some opportunities to talk with him. I never took one of his classes but I knew he was a writer, teacher, and a veteran of military service. He mentioned other things he loved to do in his life, such as dancing and hunting. As his obituary in The Independent explains, he was a renaissance man, who lived by his own lights.

Bill was kind, thoughtful, and attentive. He told me about serving in WWII and living high up on Mountain Drive. I remember when he mentioned the loss of his home to fire in 2008. His words were stoic, accepting of life on life’s terms, but there was unambiguous sorrow in his eyes.

Bill always had notebooks with him; he was writing toward sundown. May all we writers have such insight. And when he asked about my writing and what I was working on, he listened. He was ready with a word of encouragement, so I knew I had met a good teacher.